Modeling tracheobronchial clearance of nanoparticles with variable size and geometry

By definition, nanoparticles represent very small objects with at least one spatial dimension adopting a size of less than 100 nm (1-10). In the ambient atmosphere, nanoparticles can be mainly found within the large group of ‘bioaerosols’ (e.g., viruses, bacteria, cell fragments). They also include ultrafine dusts produced by different mechanical procedures (e.g., milling, abrasion) as well as various particles originating from incomplete combustion processes [e.g., diesel particulate matter (DPM), soot] (11-15). In general, nanoparticles like those mentioned above are usually marked by geometries, which may significantly deviate from ideal spherical shape. Whilst small bioaerosols and dust particles preferentially adopt tubular or platelet-like geometries, diesel exhaust particles and soot chiefly occur as irregularly shaped aggregates containing a high number of nanoscopic components (11-20). All these particulate objects have in common that they may be taken up into the human body by inhalation. Depending on their size and shape nanoparticles show either a preference to deposit in the upper lung regions or a predilection to settle in the central to peripheral structures of the respiratory tract (21-29).

Immediately after their deposition in the different parts of the human respiratory tract nanoparticles are subjected to an innate defence system including a high variety of clearance mechanisms. In the tracheobronchial tree, fast clearance represented by the so-called ‘mucociliary escalator’ can be distinguished from a slow clearance phase, which seizes all those particulate objects not captured on the mucus layer (30-40). According to the present knowledge slow bronchial clearance includes the temporary storage of particles in the periciliary liquid, processes of transcytosis and extracellular transport as well as the uptake and removal of particulate mass by airway macrophages (30-35). Whilst mucociliary clearance is mainly finished within the first 24 hours after aerosol exposure, slow clearance mechanisms are thought to adopt half-times between 1 and 20 days, so that main particle masses seized by these processes are removed from the tracheobronchial tree after 5 to 100 days (Figure 1) (30-40). 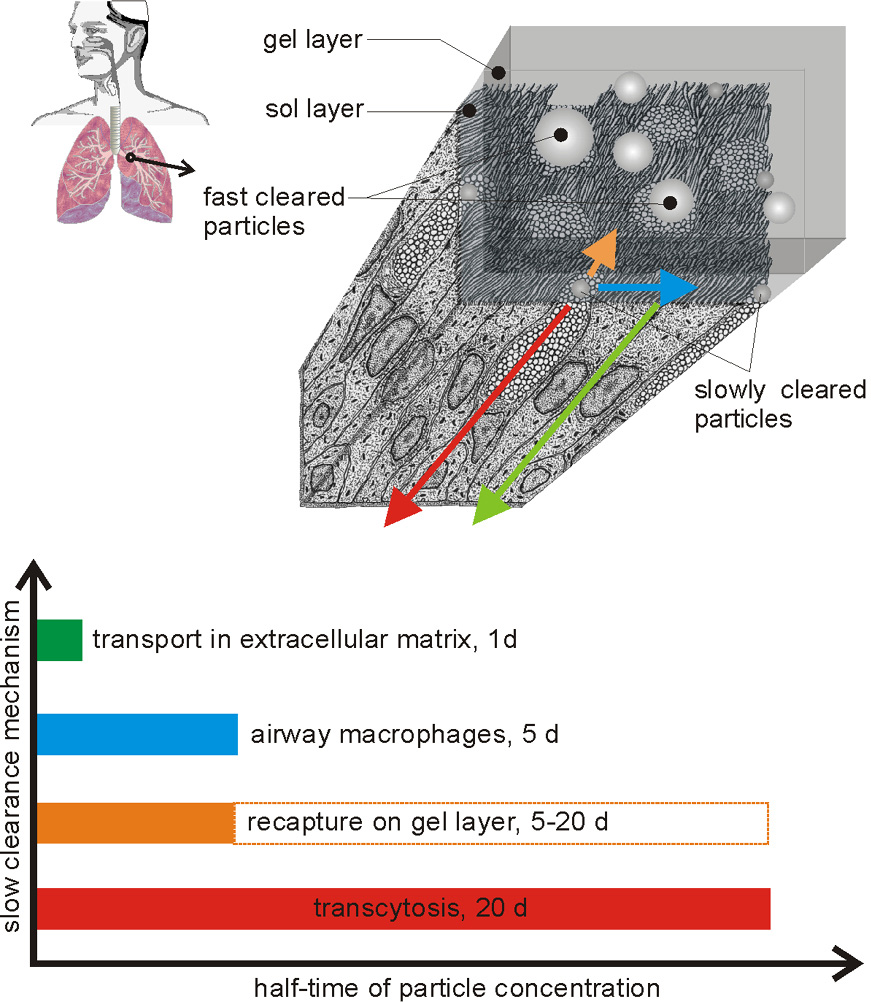 Figure 1 Histological organization of the bronchial/bronchiolar airway epithelium and its cover by the mucus blanket consisting of the highly viscous gel layer and the watery sol layer (periciliary liquid). Whilst particles captured on the gel layer are commonly removed by fast mucociliary clearance, particles reaching the sol layer undergo slow bronchial clearance. Regarding nanoparticles four different clearance mechanisms with half-times of particle concentrations ranging from 1 to 20 d can be distinguished.

In the nearer past, tracheobronchial clearance in the human respiratory tract stood in the focus of a multitude of experimental and theoretical studies (30-44). As a main result, it could be demonstrated that the fractions of fast and slowly cleared particles depend on the size, the geometry, and the physical density of the inhaled particulate material. According to numerous model computations, small spherical particles are cleared much slower from single bronchial and bronchiolar structures than large tubular or platelet-like objects. Whilst the spheres represent ideal targets for temporary storage in the periciliary liquid and transcellular dislocation processes, thin platelets with large diameters and long tubes cannot be handled by the epithelial cells in the same way and thus preferentially undergo a transport on the mucus layer (40-45).

In the study presented here, tracheobronchial clearance behaviour of nanoparticles with different sizes and geometries was submitted to a detailed theoretical investigation. For this purpose, spheres with a diameter of 1, 10, and 50 nm as well as cylindrical objects with same diameters and aspect ratios ranging from 0.001 (extremely thin platelets) to 1,000 (extremely long tubes/fibers) were generated. Tracheobronchial clearance of these particles was modelled for healthy adult subjects, who had inhaled respective aerosols under sitting breathing conditions (46). The study can be evaluated as innovative insofar as:

Main features of the clearance model

Since the mathematical approach used in this contribution has been already described in numerous preceding papers (30-45), only those features most salient for the under­standing of the model will be outlined in this section. In principle, the related computer program includes a stochastic architecture of the human respiratory tract, where geometric parameters of airways (diameters, lengths, branching angles) belonging to a specific lung generation are normally distributed. For each bronchial and bronchiolar tube of the airway tree, morphometry is determined by application of parameter-related probability density functions on the one hand and the random number concept on the other (38,39). In order to obtain a reliable approximation of the mucus transport on the epithelial surface of the airway tubes (mucociliary clearance), it is assumed that the luminal side of the entire tracheobronchial tree is uniformly covered with a mucus blanket, which is marked by a constant transport velocity within each tubular element. In addition, the mucus layer of a given airway tube is characterized by constant thickness due to equal mucus production over the whole length of the bronchial or bronchiolar structure. Based upon an experimentally measured tracheal mucus velocity (TMV) of 15 mm/min and mucus thickness of 27 µm, mucus dynamics in the following airway generations are computed by using (I) an exponential function describing the development of mucus thickness from the main bronchi to the terminal bronchioles and (II) a downscaling procedure involving the stochastic airway morphometry described above. According to the model, respective mucus velocities determined for peripheral bronchiolar airways (generation 20) are four to five orders of magnitude lower than those measured in the trachea (30-40).

Theoretical approximation of slow bronchial clearance is carried out by determination of the slow clearance fraction (fs) in a first step. This fraction includes all those particles settled on the epithelial walls, which are captured by clearance mechanisms beyond the mucociliary escalator. According to previous investigations, the number of slowly cleared particles mostly depends upon particle size, but is also related to the physical density and the geometry of the particulate objects. It is assumed that deposited particles have to pass the mucus blanket (by sedimentation or via discontinuities) and reach the so-called periciliary liquid in order to undergo slow bronchial clearance. Thereby, four independent mechanisms of this clearance phase can be distinguished: (I) re-transfer of particles from the periciliary liquid to the mucus layer due to cilia activity, (II) uptake of particles by epithelial cells with temporary storage and transcytosis, (III) uptake of particulate masses by airway macrophages, (IV) fast transport of particles to the blood capillaries via the extracellular matrix. All these mechanisms are characterized by half-times of the related particle concentrations ranging from 1 to 20 days (40-46). This results in durations of slow bronchial clearance varying between 5 and 100 days. Slow bronchial clearance mechanisms are assumed to exhibit an independence of the site within the tracheobronchial tree.

Model computations were carried out under the assumption of a respiratory tract belonging to a male adult (FRC: 3,300 cm3). For the deposition and subsequent clearance simulations, unit-density nanoparticles (1 g/cm3) with spherical or cylindrical diameters of 1, 10, and 50 nm were used. Besides objects with ideal spherical geometry also cylindrical platelets with aspect ratios ranging from 0.001 to 0.1 as well as cylindrical fibers with aspect ratios ranging from 10 to 1,000 were included in the modelling procedure. Inhalation of the respective particle-loaded aerosols was supposed to take place under sitting breathing conditions [tidal volume: 750 cm3, breath-cycle time: 4.5 s, breath-hold: 1 s (46)] and inhalation of the air through the nose. Clearance of single particles was expressed by calculation of retention values (24-h retention) on the one hand and the simulation of time-dependent clearance curves on the other.

Dependence of retention values on particle size and shape

Based on the results presented in this study it may be concluded that nanoparticles are characterized by highly specific clearance behaviour. In general, overall velocity and related duration of tracheobronchial clearance depends upon two particle parameters, namely the size and the geometry of the studied particulate objects. This means that nano-scale platelets with minimal thickness are cleared with an efficiency, which significantly differs from that of larger fibers with extreme length. The results summarized in Figures 2 and 3 are largely confirmed by other theoretical studies provided by the author (30-45). In the case of spherical particles, also experimental confirmation of the model predictions is given, because it was found that ultrafine particles (<100 nm) may be removed from the epithelial surface via the extracellular matrix filling the caps between two neighbouring cells. This diffusional transport is remarkably accelerated with decreasing particle size and may result in an evacuation of particulate mass towards the blood capillaries within several minutes to hours (41,42). For the other slow bronchial clearance mechanisms introduced in this contribution, only further theoretical data are available hitherto, whereas comparable results of targeted experiments are still very sparse (40-45).

In general, it may be noticed that tracheobronchial clearance of nano-scale particles differs from that of micro-scale particles in several aspects. Since slow bronchial clearance performs a continuous rise with declining particle diameter (40-45), nano­particles produce much higher fractions of slowly cleared mass than microparticles [note: particles with a geometric diameter of more than 6 µm do not produce any slow clearance fraction at all (30-40)]. On the other hand, nanoparticles undergo an additional removal through the extracellular matrix representing an effective barrier for most particulate objects that belong to the micrometer scale (40-45). Summing up all these considerations, total tracheobronchial clearance times of nanoparticles on the one side and microparticles on the other are characterized by rather similar values. According to numerous histological investigations it has to be assumed that tracheobronchial clearance exhibits great differences between the upper, central and peripheral airways. Since the number of goblet cells and subepithelial glands is successively diminished from airway generation 1 to 20, efficiency of the mucus transport is marked by a similar decline. Hence, larger particles deposited in small ciliated airways are captured by slow clearance mechanisms to a higher extent than predicted by most models (41,46).

The influence of particle geometry on the distribution of fast and slowly cleared particulate masses was already predicted in many previous papers (40-45,47-50). Whilst ultrathin nanoplatelets already approach molecular size and thus undergo a kind of molecular transport in the different cell layers, ultralong nanofibers partly adopt the aerodynamic and clearance behaviour of micro-scale particles being marked by prolonged intracellular storage phases (40-45). From a pharmacological state of view, medicals administered to the respiratory tract in the form of nanospheres are mainly deposited in the upper and central airways, where they have the ability to reach the lung-associated blood vessels within a rather short period of time (47-50).

A retrospection on the results of this contribution allows the conclusion that the prediction and measurement of nanoparticle clearance may be an essential field of medical research in nearer future, so that numerous studies dealing with this question should follow in the next years.