Systolic blood pressure target: Have we identified the optimal target yet?

Systemic hypertension remains the leading modifiable risk factor for the global burden of disease (1). Over the past five decades, we have identified effective therapeutic interventions to further reduce the risks associated with poorly controlled hypertension. However, the optimal systolic blood pressure (SBP) “target” has been a matter of ongoing debate. This debate has been reflected in recommendations by various groups. For example, the former members of the Eighth Joint National Committee Panel recommended a therapeutic SBP target <140 mmHg for subjects <60 years, and <150 mmHg for those ≥60 years of age (2). In contrast, other societies recommend a therapeutic SBP <140 mmHg in adults irrespective of age (3,4). These differences reflect the remaining knowledge gaps in the field.

To directly address these gaps, two recent, large, multicenter randomized trials (5,6) explored benefits (and risks) of a more “intensive” SBP target (i.e., <120 mmHg) compared with the “standard” target (<140 mmHg) (Table 1) (2-8). The initial results reported from the ACCORD-BP trial suggested a lack of benefit of an intensive SBP reduction on the composite outcome of nonfatal myocardial infarction, nonfatal stroke, or cardiac death in hypertensive patients with type 2 diabetes at a mean follow up of 4.7 years (5). However, additional analyses of this trial documented an interaction of SBP reduction and glycemic control (8). Thus, evidence for risk reduction emerged in the groups intensively treated for BP (26%) or glycemia (43%), or both (29%), compared with combined standard BP and glycemia treatment. For the secondary outcomes, stroke risk was significantly reduced by intensive BP treatment, and myocardial infarction was reduced by intensive glycemia treatment. Most of the other outcomes were either neutral or favored intensive treatment groups (8). The findings of ‘lower is better’ were further confirmed in the SPRINT trial, which compared the same intensive SBP target to a standard SBP target in non-diabetic subjects ≥50 years of age with high cardiovascular risk or prediabetes. These investigators found that an intensive SBP target was associated with a 25% reduction in risk for adverse outcomes (similar to ACCORD-BP), and a 27% reduction in risk of all-cause mortality at a median of only 3.2 years follow-up (5). 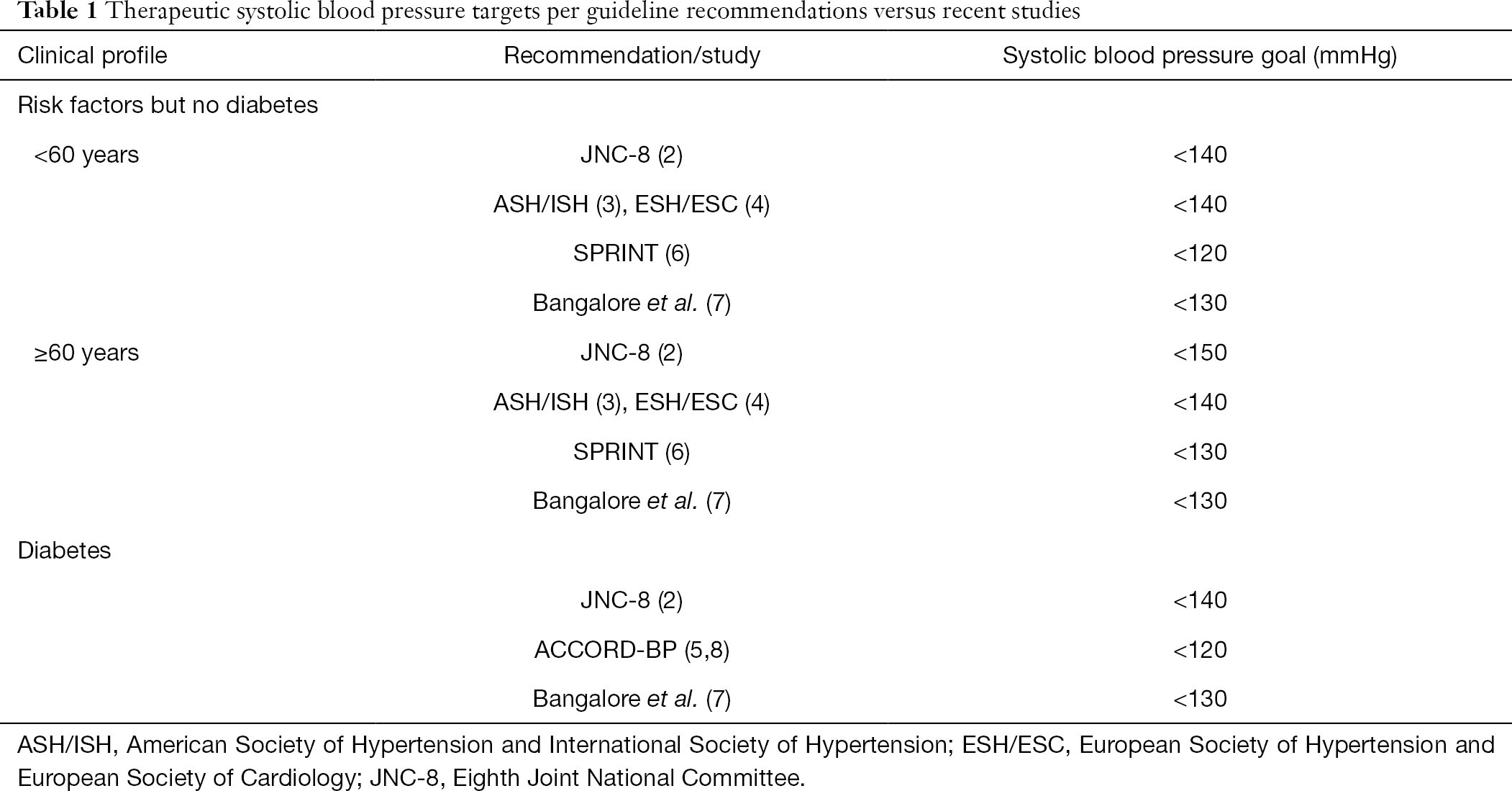 In this context, Bangalore et al. performed a network meta-analysis of randomized trials to evaluate the efficacy and safety of various SBP targets (7). This study included individual randomized trials that compared at least two different SBP targets and reported clinical outcomes. As an advantage of a network meta-analysis, the authors were able to compare several SBP categories (i.e., <160, <150, <140, <130, and <120 mmHg). The efficacy outcomes assessed in this meta-analysis included stroke, myocardial infarction, death, cardiovascular death, and heart failure; while the safety outcomes included serious adverse events––angioedema, hypotension, syncope, bradycardia/arrhythmia, or hypo/hyperkalemia. The authors identified 17 randomized trials with a total 204,103 patient-years of follow-up. The authors demonstrated that a SBP <120 mmHg was associated with a lower risk of the adverse outcomes of stroke and myocardial infarction, compared with the other SBP targets. This was offset by an increased risk of serious adverse events with a SBP <120 mmHg. There was no difference in the risk of death, cardiovascular death, or heart failure among the different SBP targets. By performing a cluster analysis (i.e., to balance both efficacy and safety), the authors demonstrated that a SBP target <130 mmHg had the optimal balance between efficacy and safety.

The strength of this study is the large number of patients enrolled, which allows assessment of individual, rather than composite, outcomes, and the meticulous statistical analysis allowing comparison of different SBP targets in terms of efficacy and safety. Despite potential criticisms that might arise as this meta-analysis included only ‘trial-level data’, rather than individual patient-level data, and the population was somewhat heterogeneous (e.g., SPRINT excluded patients with diabetes, while ACCORD BP enrolled only those with diabetes), this meta-analysis offers very important insights into balancing the risks and benefits of intensive SBP control.

These meta-analysis findings strongly suggest the notion that the optimal SBP target is likely <130 mmHg, which is not consistent with the results of the ACCORD-BP or SPRINT trials (6,8). Although the SPRINT trial found a 25% reduction in risk in the primary outcome, and 27% reduction in risk of all-cause mortality, the absolute risk reduction for these outcomes was relatively small (1.5% [number needed to treat =61], and 1.2% [number needed to treat =90], respectively) over ~3 years, which translates to ~0.5% reduction in risk of a primary outcome event/year. However, given the high prevalence of hypertension and associated adverse outcome implications, this is very important. On the other hand, there was an 88% relative increase (or ~2% absolute risk increase [number needed to treat =45]) in risk for serious adverse events (which included hypotension, syncope, electrolyte abnormalities, and acute kidney injury; most of which were transient abnormalities). What further adds to the complexity of interpreting data from SPRINT and ACCORD-BP is the lack of assessment of quality of life among the subjects. Moreover, concern has been raised about the ‘lack of a health care attendant’ at the time of the automated SBP measurement in both trials, which has been estimated to result in about a 10–15 mmHg lower SBP compared with the usual ‘attended’ office SBP, as in most other trials (9). In other words, the ‘usual SBP’ (e.g., as measured in the clinic and most other BP trials) extrapolated from SPRINT and ACCORD-BP intensive SBP reduction arms would more likely be ~130 mmHg in the usual ‘attended’ clinical setting.

Other emerging observational data have been consistent with these findings. In an analysis of >22,000 hypertensive patients with coronary artery disease (CAD) in the CLARIFY registry, a SBP <120 mmHg was associated with an increased risk of cardiovascular death, myocardial infarction, and stroke, as well as SBP >140 mmHg. The risk of adverse outcomes was lower with a SBP ~130 mmHg (10). In an extended follow-up analysis of the INVEST analysis of hypertensive patients with CAD, achieving a SBP of 130–140 mm Hg during the active phase of the trial (~3 years) was associated with lowest risk of all-cause mortality at ~12 years of follow-up (11). These observational analyses, as well as the study by Bangalore et al., all support the notion that achieving a target SBP ~130 mmHg is likely to be associated with the best (e.g., ‘optimal’) outcomes in terms of efficacy and safety.

In conclusion, we believe that the available evidence supports the suggestion that a universal SBP <120 mmHg (based on the results of the ACCORD-BP and SPRINT trials) might not be the optimal SBP target. Although most studies demonstrated a reduction in risk of adverse outcomes with intensive SBP lowering, this reduction is relatively small and is offset by an increase in the risk of serious adverse events. We suggest that achieving a usual clinic SBP <130 mmHg has the optimal balance between efficacy and safety.