Akseer and her colleagues recently published a seminal paper in the Lancet Global Health that adds to the compelling evidence of progress in reproductive, maternal, newborn and child health (RMNCH) in the past few decades, even in countries such as Afghanistan that are burdened by chronic conflict, rampant poverty and large health inequalities (1). The article highlights how Afghanistan confronted challenges of a fragmented, deteriorating and gender segregated health system established by the fundamentalist Taliban regime during their reign between 1994 and 2001, and continued insecurity and disruptions from frequent insurgencies by investing in effective policies and programs for RMNCH and nutrition. The main strategy adopted was an emergency approach almost exclusively financed by official development assistance which prioritized contracts to large national and international Non-governmental Organizations (NGOs) to support a surge in human resource development immediately after the ousting of the Taliban through training and deployment of community health workers, nurses, midwives and general physicians, and aggressive acceleration in national immunization programs.

The Afghanistan case study is part of a portfolio of ten in-depth country case studies undertaken by the Countdown to 2015 initiative to understand how and why countries progressed towards improving women’s and children’s health during the MDG era, and to systematically explore what factors might explain the specific patterns of progress in individual countries (2). The studies each involved a partnership between academic institutions able to provide technical assistance and capacity building, and country based teams consisting of members not directly involved in program implementation to ensure an independent assessment of progress. Countries ideally assessed more than one RMNCH outcome, and distilled lessons learned and recommendations for action that are potentially generalizable to other settings. Countdown to 2015 was a global initiative to track, stimulate and support country progress towards achieving the health related MDGs, particularly goals 4 (reduce child mortality) and 5 (improve maternal health). It specifically focused on tracking coverage of a core set of evidence-based interventions proven to reduce maternal, newborn and child mortality in the 75 countries where over 95% of maternal and child deaths occur (3).

The first Countdown case study, carried out in Niger in 2012, was an eye opener to the usefulness of the rigorous case study model in supporting countries in their choice of RMNCH program strategies, adapted to their specific contexts (4). A landlocked country with pervasive poverty and classified next to last on the Human Development Index in 2011, Niger managed to reduce its under-five mortality rate by 43% between 1998 and 2009, and counted among the few countries in Africa that reached MDG 4. Niger achieved this through a sustained effort in adopting and implementing policies and programs to increase access to health care including the rapid deployment of community health workers, provision of free health care for children and women, targeting leading killer infections such as malaria, and the introduction and expansion of nutritional rehabilitation centers to tackle frequent and recurrent famines and droughts. The other nine case studies were carried out in Afghanistan, Bangladesh, China, Ethiopia, Kenya, Malawi, Peru, and Tanzania, a diverse set of countries representing different regions and each providing rich lessons of progress in RMNCH (2).

As discussed by Akseer and colleagues, the mixture of poverty and lasting conflicts with consequent social and political fragmentation posed significant challenges to Afghanistan. But, how does Afghanistan compare to its neighbors and to the average of the 75 Countdown countries? In regards to the latter, Figure 1 adapted the continuum of care chart presented in the 2015 Countdown report, highlighting Afghanistan for indicators for which data was available since 2009. It is not surprising to find that coverage of RMNCH in Afghanistan is below the average coverage levels of the 75 Countdown countries for 10 of 14 lifesaving interventions. However, coverage for treatment of childhood illnesses such as pneumonia and diarrhea, which are responsible for almost a third of under-five deaths in the country, is well above the median coverage for the Countdown countries. The same pattern can be seen for early initiation of breastfeeding and vitamin A supplementation. Nevertheless, the appreciable increase in coverage of RMNCH interventions, as reported by Akseer and colleagues, should not conceal the fact that coverage levels and trends remain insufficient for most interventions and delivery platforms. 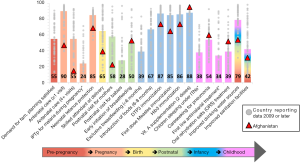 Compared to its neighbors and despite being the poorest country, Afghanistan has shown very encouraging progress in maternal and child survival. Afghanistan is surrounded by countries that are all classified by the World Bank as either upper middle income (Iran, China and Turkmenistan) or lower middle income (Pakistan, Tajikistan, Uzbekistan). Available mortality data in Afghanistan come from household surveys and must be taken with caution as they have been shown to be of poor quality or non-nationally representative (5). Best national estimates come from statistical models produced the UN interagency estimation groups and the Institute for Health Metrics and Evaluation (6,7). While child mortality estimates from these models appear to agree between the two institutions, maternal mortality estimate are far apart. Taking the estimated under-five mortality rates, Table 1 shows changes between 2000 and 2015, as modelled by the UN Interagency Group for Mortality Estimation (IGME). Afghanistan shows the highest level of mortality. However, Afghanistan’s rate of decline in the past fifteen years has been fairly appreciable, surpassing Pakistan, and comparable to Turkmenistan and Uzbekistan. It appears that reconstruction efforts and periods of political stability since the ousting of the Taliban regime may have created an environment more conducive to expansion of the health care workforce and infrastructure, contributing to increase in access to health care. The production of third party balanced scorecards which helped identify gap areas and areas of progress has also been credited with driving improvements in coverage, quality, and accountability of services (8).

Given its maternal and child survivals gains over the past decade, how do Afghanistan’s progress and future prospects position the country in relationship to the Sustainable Development Goal framework and to other global initiatives such as the Global Strategy for Women’s, Children’s, and Adolescents’ Health, the Every Newborn Action Plan (ENAP), and the Ending Preventable Maternal Mortality (EPMM), all presenting goals and targets for countries to adopt to end preventable maternal, newborn and child deaths by 2030 (9,10)? Take for example the Sustainable Development Goal 3.2 (SDG 3.2) that aims to “end preventable deaths of newborns and children under 5 years of age, with all countries aiming to reduce neonatal mortality to at least as low as 12 per 1,000 live births and under-5 mortality to at least as low as 25 per 1,000 live births” by 2030. Reaching this under-five mortality target will require Afghanistan to achieve an annual rate of reduction of at least 8.3% over the period 2015–2030, tripling the past pace of estimated decline for the period 2000–2015. For neonatal mortality, the acceleration must be even higher, surpassing almost five times the slow annual rate of reduction during the period 2000–2015. Although a country specific target is yet to be established for maternal mortality, similar herculean efforts must be deployed in maternal health, to accelerate reduction in the maternal mortality ratio. While it is imperative that national efforts are strengthened to accelerate progress, it will be a daunting task to achieve this pace of maternal and child mortality declines under Afghanistan’s current conditions. Furthermore, the SDGs, the ENAP and the EPMM frameworks do not include targeted strategies for conflict and insurgency prone countries such as Afghanistan that operate under a constant state of emergency. The responsibility is left to the country to define their own strategies that are context specific and commensurate with the targets. This limitation in the frameworks spurred some scientists to argue that the SDGs have failed parts of the world by not spelling out specific strategies to address the effects of conflicts, militarization and conflict-driven population displacement on development (11).

The findings from Akseer and colleagues’ paper highlight key lessons for Afghanistan and the world. First, progress in maternal and child health is possible, even in difficult and challenging environments. The rapid action, following the downfall of the Taliban, to redress the country’s falling health infrastructure and human resource crisis through a NGO contracting strategy and strong official development assistance appears to have been a successful approach. The current fragile situation of the country will require that such a strategy continues so that the real gains achieved are not lost, while finding ways to ensure that strategies can be sustainable and country-led over the long run. Second, progress observed so far appears to have benefited only some portions of the population, therefore continuing to exacerbate large health inequalities. Successful strategies for reaching underserved provinces, remote populations and other critical groups such as adolescent girls are urgently needed to reduce large equity gaps. Third, the government of Afghanistan must be commended for continued efforts to collect data, even under difficult circumstances, to help monitor the situation of children and women in the country. We are able to learn about progress and remaining gaps in maternal and child health because of efforts to implement eleven household surveys over a decade, although some of these surveys have not covered the entire country and suffered from data quality issues. Continued substantive efforts are needed to improve nationally representative data collection on coverage of interventions implemented through the country and on mortality.

In its next round, Countdown (now Countdown to 2030) will continue to highlight country progress in coverage of high impact interventions and increase its presence at regional and country level by working closely with regional hubs to build country capacity to undertake rigorous analyses of progress in reproductive, maternal, newborn, child and adolescent’s health and to use these findings to support the development and implementation of effective policies and programs (12). The regional hub approach will help support countries, including those affected by conflict such as Afghanistan, to translate global level goals and targets into strategies adapted to their specific contexts.

Provenance and Peer Review: This article was commissioned by the editorial office, Journal of Public Health and Emergency. The article did not undergo external peer review.

Conflicts of Interest: All authors have completed the ICMJE uniform disclosure form (available at http://dx.doi.org/10.21037/jphe.2016.12.18). The authors have no conflicts of interest to declare.