Diagnostic value of C-reactive protein, IgG, and IgA for detection of pulmonary tuberculosis: a case-control study from Eastern China

Globally, tuberculosis is one of the top 10 causes of death and the leading cause from a single infectious agent. Successful diagnosis and treatment of pulmonary tuberculosis averts millions of deaths each year (an estimated 54 million over the period 2000–2017). In 2018, a total of 7.0 million new cases were reported, of which China accounted for 9% (1). However, there are still large and persistent gaps in detection and treatment of tuberculosis patients. Currently, >30% of tuberculosis patients are not diagnosed globally. Although underdiagnosis and underreporting both contribute to these “missing” cases, underdiagnosis is considered critical to improving tuberculosis control in endemic settings (1).

There is an urgent need for screening and testing strategies that provide point-of-care test results (2). Sputum smear microscopy and mycobacterial culture requires weeks, high quality sampling, and suitable laboratory facilities (1,3). Besides, the only rapid detection method for Mycobacterium tuberculosis (MTB) recommended by WHO has not been implemented in many areas of China, and one of the reasons is its high cost (4).

Recently, serodiagnostic assays have become more available for point-of-care translation (5). Detection of blood-based biomarkers remains an appealing approach. C-reactive protein (CRP), an acute phase protein synthesized by liver hepatocytes, is often proposed for pulmonary tuberculosis diagnosis (6,7). In response to infection or tissue inflammation, the immunity is mainly stimulated by interleukin 6, interleukin 1β and tumor necrosis factor α (8). An observational case-control study indicated that expectoration, chest pain, wasting, and culture count positively associated with CRP (9). Several reports suggested that serum antibodies in tuberculosis patients reacted strongly with M. tuberculosis membrane proteins (10). Some of them have reported that IgA and IgG levels were higher in pulmonary tuberculosis patients than in healthy people (11-13). A recent systematic review stated that CRP was a valid tool for screening persons living with HIV (14) however its use in tuberculosis patients without HIV is not clear.

To improve our understanding of the diagnostic value of CRP diagnostics, we performed a case-control study in Eastern China and investigated the ability of CRP, alone and in-combination with IgG and IgA between pulmonary tuberculosis patients and healthy population. We presented the following article in accordance with the STROBE reporting checklist (available at http://dx.doi.org/10.21037/jphe-20-38).

Serum specimens of both pulmonary tuberculosis group and control group were collected by standard venipuncture in sodium heparin tubes. Concentrations of CRP, IgG and IgA were measured in duplicate serum samples using the turbidimetric inhibition immunoassay (ERKN, China) according to the manufacturer’s instructions.

The study was conducted in accordance with the Declaration of Helsinki (as revised in 2013). The research was considered part of routine public health surveillance and, due to this, was considered exempt from ethical approval. All data were de-identified prior to use, and identifying information was not available. Written informed consent was obtained from all eligible TB patients.

Demographic characteristics of all the participants 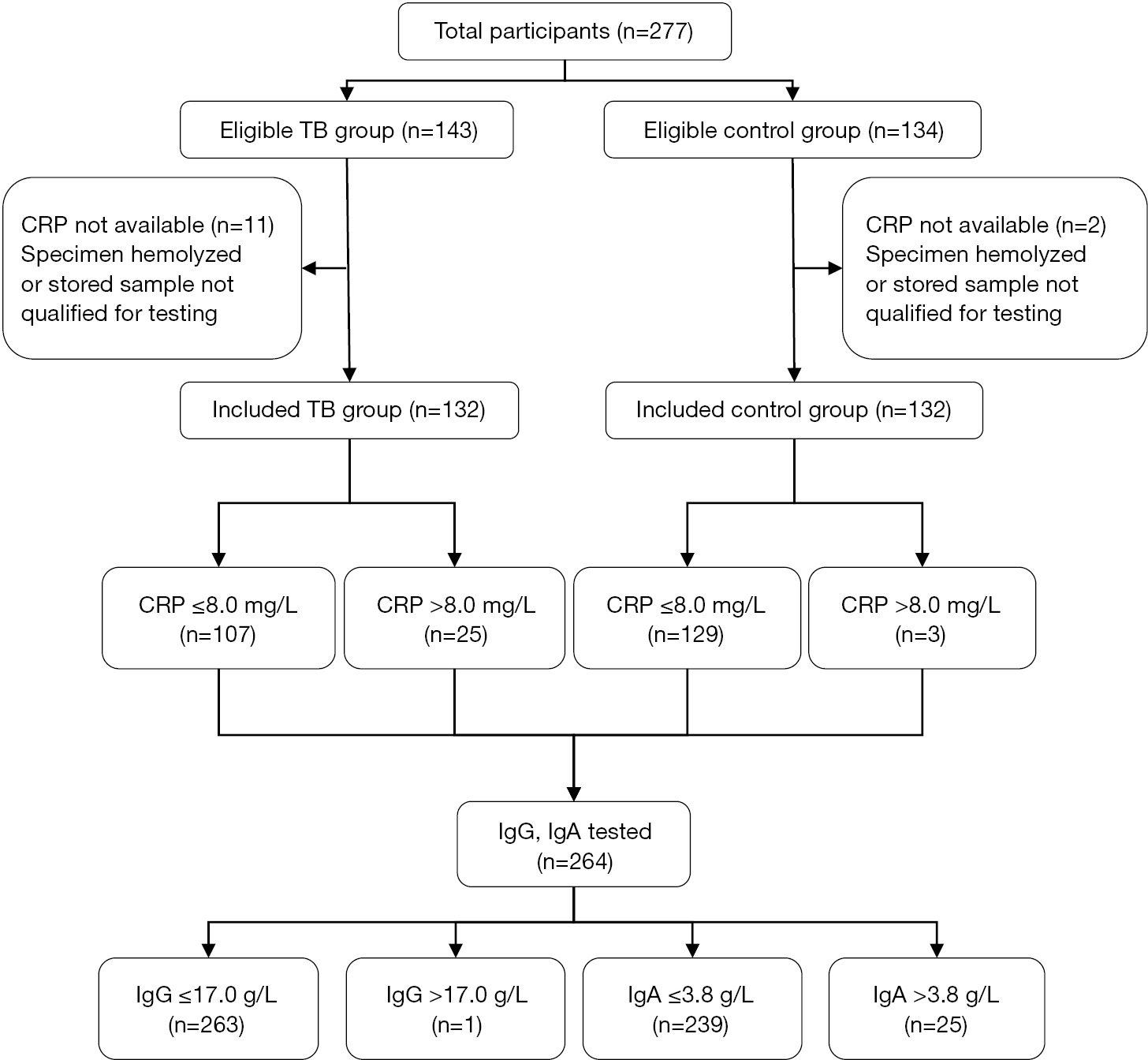 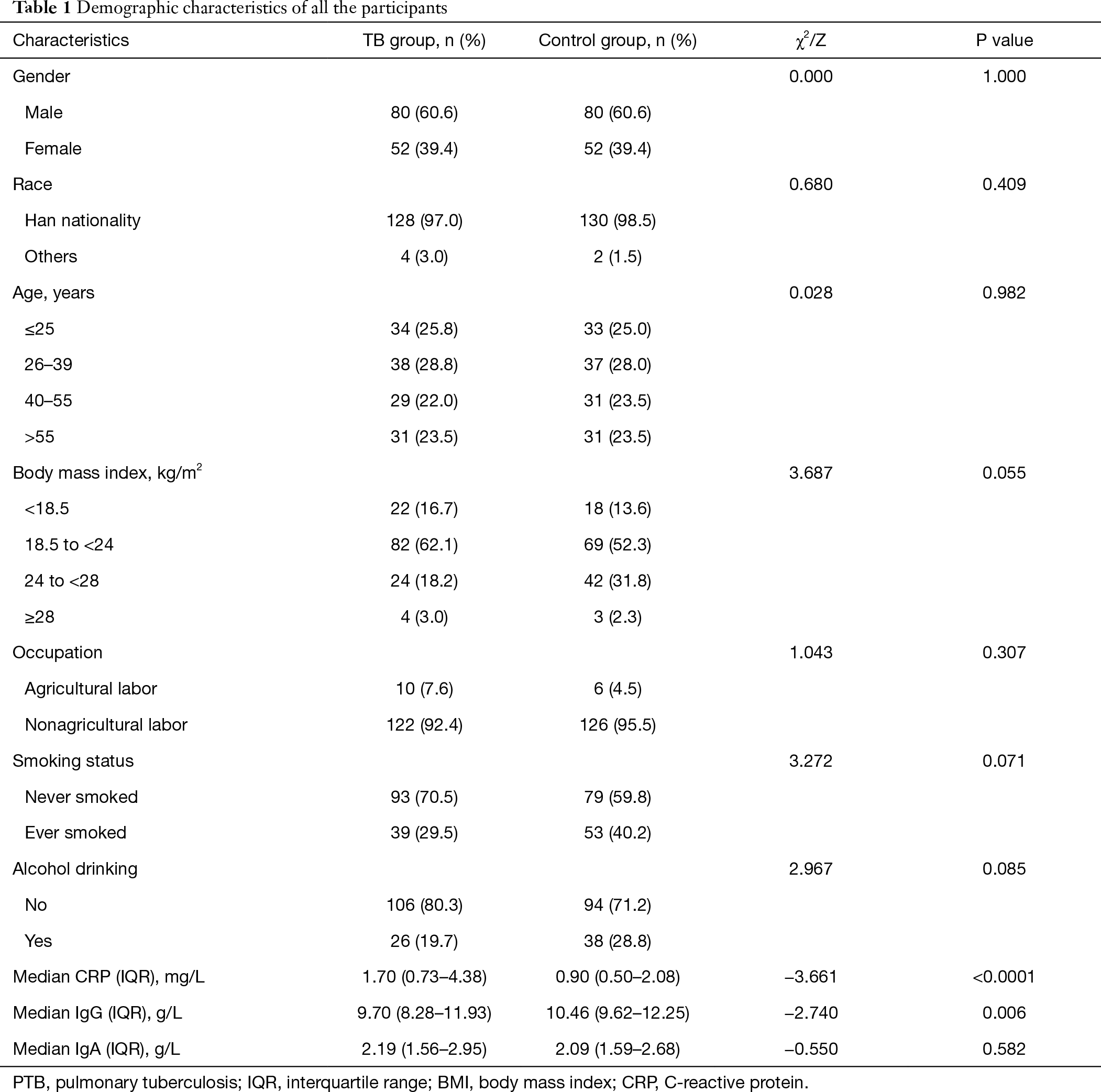 Table 1 Demographic characteristics of all the participants
Full table

Comparisons of CRP, IgG, and IgA values between groups 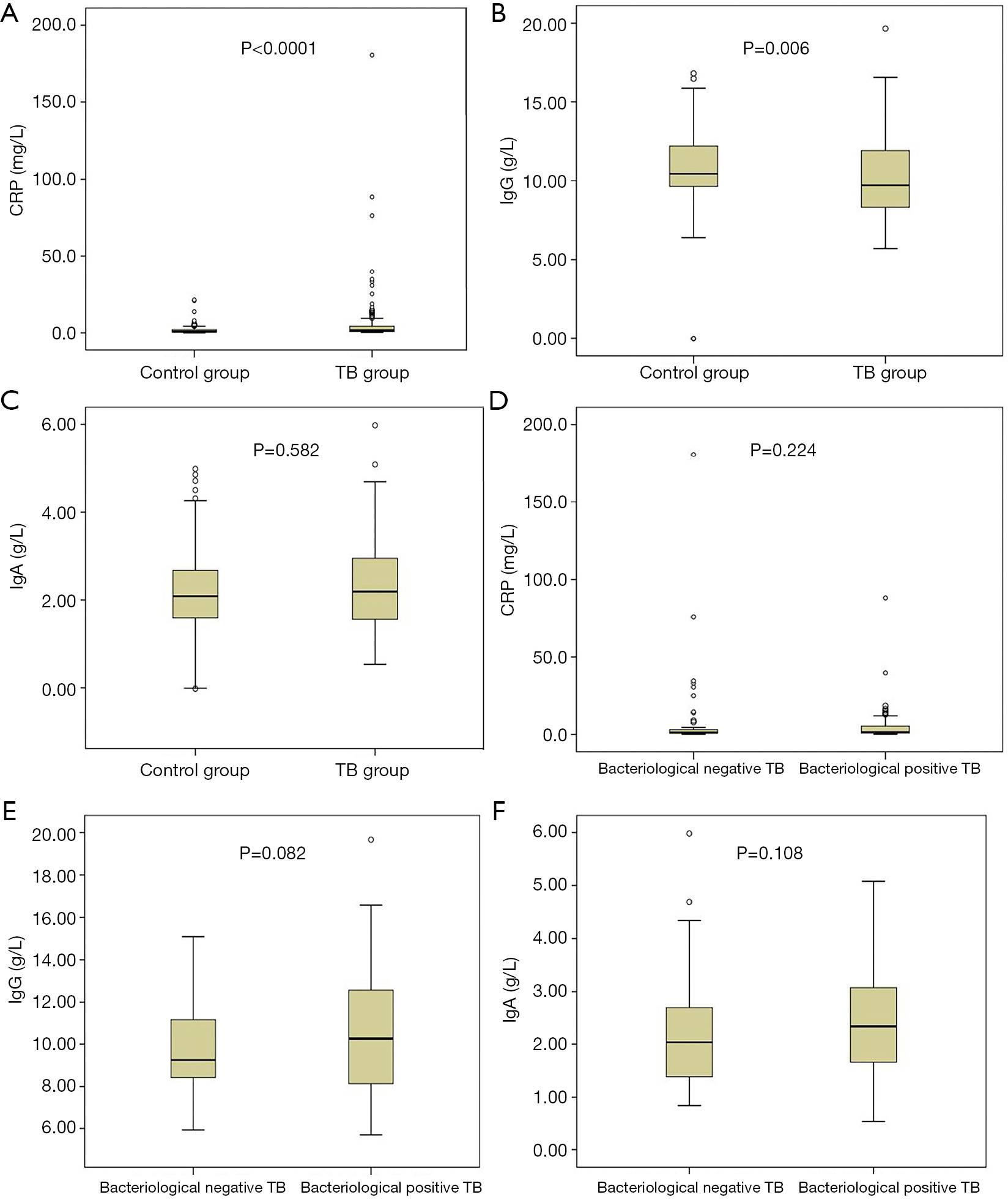 For CRP, we estimated the sensitivity, specificity, positive and negative likelihood ratio for ruling in or out a pulmonary tuberculosis diagnosis (Table 2). For bacteriologically negative patients, relatively higher specificity was available when CRP >5 mg/L, which was 95.31% and the sensitivity was quite low (15.65%). With the CRP cut-off points set as 5 mg/L, the values of +LR and −LR were 4.25 and 0.80 in bacteriological positive group. When CRP >8 mg/L, the sensitivity and specificity for pulmonary tuberculosis group and control group were 12.50% and 95.31%, respectively. 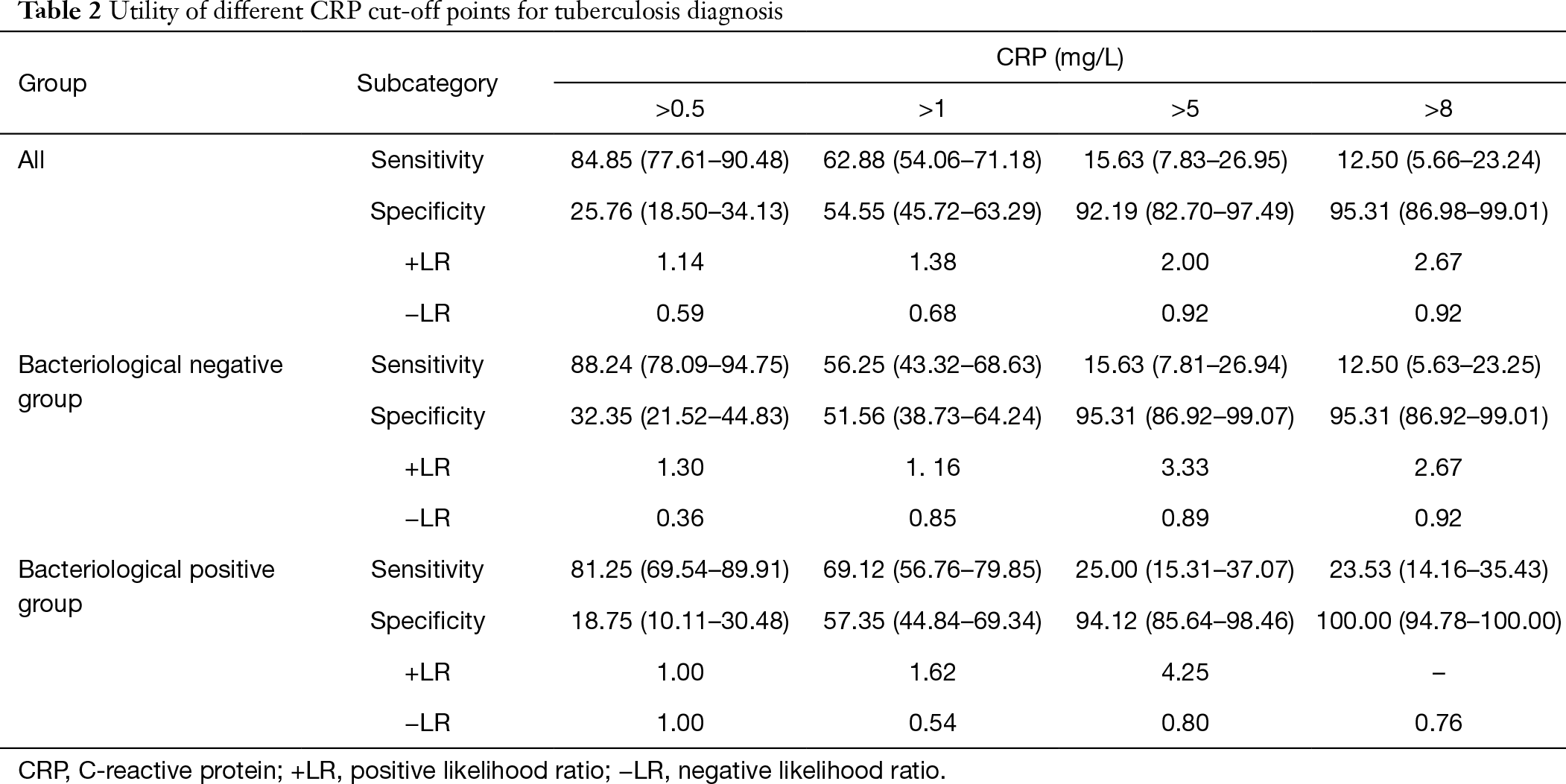 Comparisons of diagnostic accuracy of CRP, IgG and IgA

Our study found that CRP demonstrated limited diagnostic value, even when combined with IgG and IgA, in the diagnosis of pulmonary tuberculosis. Both combined assays could increase the diagnostic accuracy in bacteriological negative group than CRP alone.

It has been shown previously that when cut-off points of CRP were implemented to assess their utility in pulmonary tuberculosis diagnosis, sensitivity decreased and specificity increased when CRP values were raised in turn (19,21), which was consistent with our results. We estimated the values of sensitivity, specificity, positive likelihood ratio (+LR) and negative likelihood ratio (−LR) of CRP for different CRP cut-off points in three groups. The values of sensitivity were higher than 50% when CRP >1 mg/L in three groups, then it went down significantly with raising CRP cut-off values. When CRP >5 mg/L, the values of specificity were quite high, all above 90%, meaning that CRP might be more useful for reducing misdiagnosis rate.

We further compared the diagnostic values of CRP alone, combined assay with CRP and IgG, combined assay with CRP, IgG and IgA in different groups. All of them could potentially discriminate between pulmonary tuberculosis patients and healthy population, but the accuracy of pulmonary tuberculosis diagnosis was not high. For bacteriological negative group, both combined assays could increase the diagnostic accuracy than that of CRP alone. Although the present studies had proved the diagnostic values of blood-based biomarkers, the complexity reiterates the complexity and heterogeneity of pulmonary tuberculosis pathology and host-pathogen interactions (22,23). In the bacteriologically lower respiratory tract infection, the detection of CRP is neither sufficiently sensitive to rule out, nor sufficiently specific to rule in (24).

However, there were a few limitations. Firstly, there may be bias in the selection of control group resulting in inaccurate association. Secondly, the CRP values were relatively lower than other studies and the cut-off points for pulmonary tuberculosis diagnosis were lower. One reason is different regions and participants may influence the value of CRP.

Reporting Checklist: The authors have completed the STROBE reporting checklist. Available at http://dx.doi.org/10.21037/jphe-20-38

Conflicts of Interest: All authors have completed the ICMJE uniform disclosure form (available at http://dx.doi.org/10.21037/jphe-20-38). The authors have no conflicts of interest to declare.

Ethical Statement: The authors are accountable for all aspects of the work in ensuring that questions related to the accuracy or integrity of any part of the work are appropriately investigated and resolved. The research was considered part of routine public health surveillance and, due to this, was considered exempt from ethical approval. All data were de-identified prior to use, and identifying information was not available. Written informed consent was obtained from all eligible TB patients.